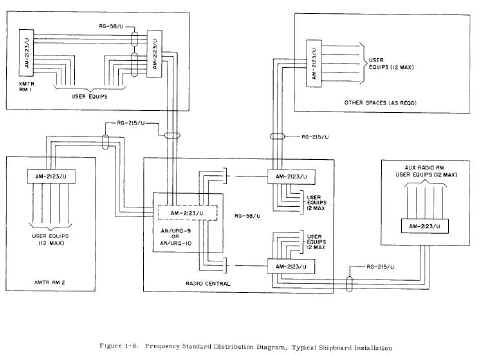 Frequency Synthesizers (for use as a frequency standard, transmitter exciter, and receiver local oscillator)

In 1951 the Navy required further increase in the accuracy and reliability in the transmission of its time signals. It had been transmitting time on high frequencies from its stations at Annapolis, San Francisco, Hawaii, and Balboa in the Panama Canal Zone, accomplished through the use of a telegraph line from the Naval Observatory to Annapolis and thence via radio relay to the remote stations. Variable errors had been experienced of up to 20 milliseconds in the Annapolis transmissions and over 100 milliseconds from the Hawaii and Balboa transmissions. After an unsatisfactory attempt to obtain improvements from commercial sources, NRL was requested to undertake the problem. NRL investigations revealed that the inaccuracies and unreliability were due to several factors, including variations in the wire line and in propagation, the reliance upon mechanical contactors to produce the time signals, and inadequacies in the time determination and transmission equipment at the Naval Observatory.

In dealing with this problem, NRL was first to develop a standard time-transmission system in which the several remote stations were provided with equipment to generate their own time-transmission signals with a high degree of accuracy, the errors of which could quickly be corrected by means of observations made at the Naval Observatory in Washington, D.C. (1953). The NRL-developed time-transmitting equipment (Model AN/FSM-5A) was first to utilize the leading edge of continuous-wave transmitted pulses generated by a quartz-crystal oscillator as a means of indicating a desired precise moment of time. This equipment was installed at all the Navy's time transmitting stations which provided coverage of the Atlantic and Pacific Ocean areas. The new system made possible for the first time transmissions from widely separated transmitting stations to a precision of one millisecond.

This Model AN/FSM-5A equipment utilized new pulse-delay and cathode-ray-display techniques for measurements to permit the precise control of the incidence of the timing pulses and to allow adjustment prior to the time transmissions. A novel regenerative type of frequency divider was devised which proved fully reliable in operation of the quartz-crystal clocks. The mechanical contactor, although retained to serve as a gate to pass the time pulses, no longer affected the accuracy of the leading edge of the time transmissions.

To improve substantially the Naval Observatory's time functions, NRL developed a quartz-crystal clock (Model AN/FSM-5B) which, for the first time, provided from a single crystal, power outputs simultaneously at both sidereal and mean solar frequencies to an accuracy of two parts in 10^10, equivalent to a possible error of one millisecond each century (1954). Power at the sidereal rate drove the star-image recording mechanism for the determination of time. The power at the mean solar rate was utilized in the observatory's surveillance and control of the time transmission of the Navy's several stations. This clock eliminated the long comparison process and errors involved in the two separate quartz-crystal clocks which previously had to be used by the Observatory in performing these functions. NRL's clock embodied a dual-frequency generator involving a special combination of electronic-algebraic operations to provide a sidereal to mean solar time ratio, as derived from Newcomb's right ascension of the mean sun. Power from the clock was also used to drive other astronomical devices at the Observatory, including its large telescope.

The Navy has been transmitting precise time and frequency on the high-frequency band since 1927, when NRL first equipped the Navy's "Radio Central" station at Arlington, Virginia with high-power, high-frequency transmitting equipment, the Model XD, already described in Chapter 3, "Radio Communication." The capability of this station to transmit simultaneously on four selected frequencies assured broad coverage for the Navy's time service. Time transmission on high frequencies are still being continued from certain designated Navy radio stations.

Experience has revealed that the rapidity of the change in phase of the transmitted energy in this high-frequency band, due to movements of the ionospheric reflecting surfaces, limited the accuracy of time transfer over long distances to one millisecond and that of frequency and time interval to one part in 10'. Propagation observations in the VLF band established that transmissions in this band were much more stable and predictable both diurnally and seasonally. In 1959, NRL proposed that the Navy's high-power VLF communication stations be used for the simultaneous transmissions of precise frequency and time together with its communications. In accomplishing this dual time-communication transmission function, NRL devised phase tracking and other techniques and a time-signal format which provided the transfer of time on VLF over long distances to an accuracy nearly two orders higher than on high frequencies, or 50 microseconds, and the transfer of frequency and time interval to one part in 10^10, simultaneously with frequency-shift-teleprinter communications (1959-1973). NRL's developments were first applied to the Navy's VLF station at Summit, Panama Canal Zone (NBA) to meet an urgent operational requirement for more precise time rating for missile launchings at the Atlantic and Pacific Missile Ranges, now known as the National Missile Ranges (1959). The NRL developments as they became available have been applied to all of the Navy's high-power VLF radio stations, providing worldwide precise time and frequency service in addition to their communication function. This system currently serves other government organizations, commercial interests, and organizations of other countries such as England, France, Australia, New Zealand, and the South American countries.

Actually, the capability of the Navy's radio stations to operate at VLF in the frequency-shift-keying mode is a direct result of NRL's work on high-precision frequency stabilization, already reviewed. The necessary phase coherence and continuity were thus made available. For incorporation of time and time-interval transmission in the system, NRL developed the first radio receiver and auxiliary equipment which could automatically track and record the phase of the received VLF energy with high precision. Through observations with NRL's equipment and the correlation of the data obtained, prediction of the corrections necessary to compensate accurately for ionospheric variations could be determined. The observations also allowed the detection of sudden ionospheric disturbances and permitted taking the necessary action to deal with them.