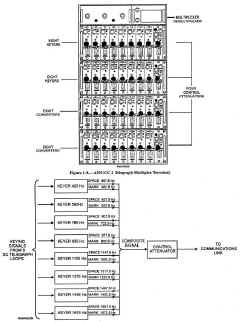 "Because of the traffic volume handled, many ships and shore stations require multiple teleprinter circuits on one sideband circuit. The method for increasing circuits on a sideband is called multiplexing. The Navy uses two multiplexing techniques in communications: time division and frequency division.

The following is an overview of how the AN/ UCC-1 works: At the transmitting station, the signals from the individual circuits, known as channels, are multiplexed into one composite signal for transmission. The transmission with the multiplexed channels is known as a tone package. At the receiving station, the composite signal (tone package) is demultiplexed (separated) into individual signals and distributed to separate teleprinters, as required. The terminal can operate in a non-diversity, audio-frequency diversity, space-diversity, or radio-frequency diversity mode. Because of this versatility, the terminal is installed in various configurations throughout the Navy.

Each electrical equipment cabinet houses one control attenuator (right side) and up to a maximum of eight frequency-shift keyers or eight frequency-shift converters. Since the control attenuator, keyers, and converters are solid-state, integrated-circuit, plug-in modules, the number of channels can be varied by increasing or decreasing the total number of modules. Depending upon the number of modules and the configuration used, the terminal can provide up to 16 narrowband channels. For example, if the terminal has keyers in the top cabinet and converters in the bottom cabinet, the system could transmit different information on eight channels. Each keyer would represent a channel on the transmit side and each converter, a channel on the receive side.

Each frequency-shift keyer accepts a dc telegraph signal input from an external loop and generates the appropriate audio-frequency mark and space frequency-shift output. The individual keyers each contain two oscillators operating on opposite sides of a center frequency. For example, in figure 1-9, the center frequency of keyer number one is 425 Hz, the mark frequency is 382.5 Hz, and the space frequency is 467.5 Hz. These audio-frequency mark and space outputs are referred to as “tones”; thus the keyer one has a one-channel, two-tone output. A dc telegraph signal on channel 1 determines which frequency is gated from the keyer to the group attenuator. Each channel works in the same way. It accepts a dc signal of marks and spaces from selected equipments patched to that channel. It then provides an audio output of either a mark or space frequency-shifted tone, according to the input. The individual tones are combined at the control attenuator into a composite tone package. The control attenuator ensures that the composite tones remain at a constant amplitude for modulating the transmitter.

At the receiving end of the communications link, the AN/UCC-1 reverses the process performed at the transmitting end. The AN/UCC-1 applies the information on each of the channels to the selected equipments connected to the converter of that charnel. In a frequency-division circuit configuration, each channel has an input from a different teleprinter. If a channel fades at a particular frequency, the information on the channel could be lost or distorted. In such cases, the information may need to be retransmitted. To help prevent this, diversity switches that will permit the use of more than one channel for the same intelligence are available. In switch position 1, only the normal channel is used. In position 2, a single teleprinter signal provides input for two adjoining keyers. In position 4, four keyers are connected to the same input loop. The switches on all keyers must be in the same position to provide the same intelligence to the selected combination of channels. When identical intelligence is transmitted on two or four channels, it is less likely to be lost or distorted.

At the receiving end, two or four corresponding converters may be used; the converter having the stronger signal input automatically provides the signal to be used by the receiving teleprinter. In the fleet broadcast multiplexing system, which consists of 16 channels, 2 channels normally carry the same intelligence. This process is called twinning."