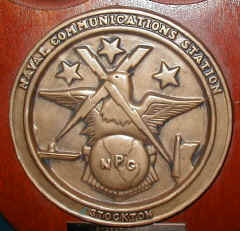 Naval Communication Station, Stockton
The histories of both sites addressed in this study, near Dixon and at Rough and Ready Island,
are associated with naval communications. An office of naval communications for the San Francisco
region was formally established on May 21, 1904 at Radio Station Mare Island, a couple of years after a
makeshift station had gone into operation. From this station, the first radio signals were transmitted to
ships in the Pacific, and by 1915, radio equipment was provided for a string of new stations up and down
the Pacific coast from the Mexican border to Alaska. In 1917, Naval Communication Station San
Francisco was established on Yerba Buena Island, with headquarters functions, leaving the transmitter
facility at Mare Island. The new entity was commonly called Radio San Francisco (Call Letters: NPG),
and Mare Island was redesignated Radio Transmitting Station of NPG. After World War I ended in
November 1918, Radio San Francisco moved to the Appraiser's Building on Sansome Street in San Francisco.

World War II generated enormous pressures to expand and improve radio facilities. In 1941
development of a 3300-acre site was begun at the north end of San Pablo Bay for Naval Radio Station
Skaggs Island, a receiving station. When the Naval radio communication facility on Skaggs Island
opened in 1942, the South San Francisco facility closed. A temporary station was established at
Castroville (until 1 July 1945), and Naval Radio Direction Finder Calibration Station Hunters Point was
established in San Francisco. These facilities were linked to Yerba Buena Island and Naval Air Station,
Alameda. In addition, because industrial expansion at Mare Island Naval Shipyard was encroaching on
the communication facilities there, a new l284-acre site was purchased at Dixon for a new transmitting
station. At the end of the war, development of Naval Radio Transmitting Station Dixon had only barely
begun. Dixon was phased into operation between 1947 and 1950. Originally designed to supersede
Mare Island, both continued to operate as transmitting stations until 1966 when the Mare Island facility
closed.

In 1955, a decision was made to transfer the principal communication facilities out of the Bay
Area, in view of the nuclear threat from the Soviet Union, to the existing Naval Supply Annex, Stockton
at Rough and Ready Island. The transfer began in 1959. On 1 July 1960, the San Francisco Civic Center
office closed, and Naval Communication Center San Francisco, Stockton, California began operation.
As part of this reorganization, a radio relay station on Mount Diablo, planned since 1944, was completed
in mid November 1960, and a substantial upgrade of facilities was initiated at Dixon. The Dixon facility
was redesignated Naval Radio Station (T), Dixon. Today it is known as Naval Radio Transmitting
Facility (NRTF) Dixon.

U.S. Naval Radio Transmitting Station, Dixon Photos of NRTF, Dixon
U.S. Naval Radio Transmitting Station, Dixon was established on 1,284 acres of agricultural land
about five miles southeast of Dixon in Solano County. The station occupied two complete sections.
Sections 8 and 17, of Township 6 North, Range 2 East. Today the site is drained along its east side by a
ditch belonging to Reclamation District 2068, and along its west side by a ditch belonging to the Dixon
Soil Conservation District. The need for drainage in the area was addressed as early as 1890 when a
county map showed a proposed drainage canal about two miles to the east. Perhaps drainage problems
account for the absence of any development of buildings on the site until it was acquired by the Navy.
In 1890, the site was bordered by section roads on its east and west sides. Road 128-336 on the
east side and Road 97 on the west side ran north to the California Pacific Railroad line (running
southwest-northeast between Benicia and Sacramento) at a point northeast of Dixon. Road 128-336
ran south to Maine Prairie, and Road 97 ran south to the Binghamton School Road. At that time, there were
four owners of the site: Eppinger and Coleman each held 160 acres. Timothy Paige held 640 acres, and
Henry Peters held 320 acres.

The undeveloped site was purchased by the Navy during World War II. Plans for construction of
a radio transmitting station were prepared by W.D. Peugh & Associates, architects of San Francisco. The
plans were approved 1 May I945 but work at the site was suspended almost immediately, in June 1945,
for financial reasons. Nearly a year after the war ended in August 1945, construction began again in July
1946. As built after the war, the facilities were more modest than originally planned during the war. The
station was phased into operation from 1947 to 1950. The housing area and its infrastructure, at the north
end of the base near the main gate, were built first. Under a separate set of plans prepared by W.D.
Peugh & Associates, dated 20 January 1947, the Transmitter Building was built near the center of the
property. Antennas were built near the Transmitter Building. Altogether, these facilities were capable of
high frequency radio transmission to other naval installations in the Twelfth Naval District, to the naval
fleet in the Pacific Ocean. and to overseas bases. In relation to Dixon, Mare Island was equipped with
low frequency radio transmission facilities.

In 1960, Congress approved $2,050,000 for expansion of fleet broadcast facilities at Dixon. This
expansion was carried out in three phases, completed 1963 to 1966. When the expansion at Dixon was
complete, the Mare Island radio facilities were shut down. The expansion included two extensions to the
transmitter building, numerous antennas of different types including ten conical monopole antennas and
two 600-foot antennas, transmission lines, transmitters, and electronic equipment. In the course of this
phased work, the earlier antennas were rebuilt or replaced. When completed, Dixon assumed the low
frequency transmitting capability previously assigned to Mare Island. Dixon was equipped for receiving,
transmitting, and “local delivery with cross-filing capability."

In 1969, the Naval Facilities Engineering Command prepared plans for renovation of the ten
original housing units on the base - the two officers' residences and the two four-unit apartment
buildings.

In 1979, operation of the facility was contracted for with a private corporation, the number of
people working at the station declined sharply, and the need to provide housing disappeared. In 1982, 27
acres around the housing area near the main gate were leased to the Dixon Housing Authority. About 75
new housing units were built and other accommodations were made for seasonal use by migrant farm
labor families. The housing area was named the Fred H. Rehrman Migrant Center, and was dedicated 16
October 1984. In separating the housing area from the naval radio facility, the housing area was enclosed
by a chain link fence on its east, west, and south sides, blocking the original road from the main gate to
the radio facilities. The original main gate became the gate into the migrant center, and a new main gate
was built on the east side of the migrant center fence.

MISSION
As an activity of the Naval Communication System, to manage, operate, and maintain those facilities, systems, equipments, and devices necessary to
provide requisite communications for the command, operational control and administration of the Naval Establishment; to manage, operate and maintain
those facilities of the Defense Communications System as assigned; and to perform such other functions as may be directed by the Chief of Naval Operations.

HISTORY
The Naval Communication Station (NAVCOMMSTA) Stockton enjoys the distinction of a proud past, dating back to the beginning of Naval Communications. It was first established in 1904 at Mare  Island Naval Shipyard as a small radio station built in a converted pigeon loft. It was the only West Coast station of a system that formed the foundation of today's Naval Communications System.

At that time the Receiver Site was moved to the Hillcrest district in South San Francisco. In l935 the station, in company with the Twelfth Naval District Headquarters; relocated to the new Federal Office Building in downtown San Francisco; and in 1942 Skaggs Island became the new remote Receiver Site; continuous growth and establishment of the fleet communication facilities eventually led to a new transmitting site at Dixon, California. By 1955 it became evident that the quarters in the Federal Office Building in downtown San Francisco were inadequate to cope with modern day communications; and therefore, in 1960, NAVCOMMSTA Headquarters,  with all its control facilities for linking the various branches of the command; was moved to Rough and Ready Island, near Stockton, California.

The Station as it now exists has the reputation of being one of the best and most modern of all Naval Communication Stations with a complex consisting of the Headquarters at  Stockton, California; Radio Transmitting Facility, Dixon, California; Radio Receiving Facility Skaggs Island, Sonoma, California; and Naval Telecommunication Centers (NTCC's) at Oakland, Monterey, Mare Island, Concord, Bangor, Moffett Field, and Alameda; and NTCOC Sunnyvale. The microwave repeater stations on top of Mt: Diablo and Mt. Vaca tie many of these activities together. Naval Radio Station (T) Jim Creek, Oso, Washington is an Echelon IV activity under NAVCOMMSTA Stockton.

Approximately 360·military and 440 civilian personnel are members of the family called Naval Communication Station Stockton, The station has several mast-type antennas; with an eight-story-tall tower, holding a sixty-foot dish antenna that links the station into a worldwide satellite communication system,