Many good RATT signals are so degraded at the receiver that they become either unreadable or take too many hits to be of much use. This is often the result of improper tuning of the receiver. The intent of this article, therefore, is to provide some understanding of the required tuning procedures for proper reception of RATT signals.

2. Turn on the receiver BFO and set its frequency 2.0 kHz BELOW the center of the receiver pass band (2550 Hz for receivers used with older, unmodified TTY Terminal Units). This value is used because single-channel TTY converters use a passband centered at 2 000 Hz in present units, or 2550 Hz for older units. Some receivers have an "FSK" mode in which the BFO is automatically set to the proper value by the mode switch. Other receivers are merely aligned so that the "zero beat" position of the BFO falls in the center of its travel; for these receivers, the proper BFO setting for RFCS operating must be found using step 3. Once the proper point on the BFO control is found, it is a good idea to mark it as the "FSK" setting.

4. If the TTY printer now "prints inverted", the order of sidebands has been inverted in the receiver. This happens in some receivers on some of their bands. When this is the case, there are two alternatives available: either repeat steps 2 and 3, resetting the BFO ABOVE the center frequency rather than below, or else operate the TTY converter NORMAL/INVERT switch to the INVERT position.
=======

A field change has been developed for converting TTY terminal units to a center frequency of 2000 Hz instead of 2550 Hz so that those receivers that now cannot be offset by 2550 Hz in a stabilized mode can be operated with a stabilized 2.0 kHz offset. TTY terminal units so converted will copy 2425 Hz as a mark and 1575 Hz as a space, which are the values currently used by the AN/URC-32, the AN/ARC-94, and some others. In order to produce reliable copy of RFCS RATT signals, a receiver should be operated in a tuning mode that provides best stability and accuracy. By using TTY terminal units centered on 2.0 kHz, the associated receiver can be operated at stabilized increments of frequency.

For use with unmodified older TTY terminal units, some receivers such as those of the AN/WRC-1, AN/URC-3 2, and AN/URC-35 employ BFO (carrier) injection only at the dial frequency and therefore the tuning cannot be offset by the required 2550 Hz while the receiver is in a stabilized mode. For operation of the R-1051/URR receiver (Part of the AN/WRC-1) with 2550 Hz terminal units, the following procedure will be helpful:

1 . The receiver "window " or reception pass band is offset 1.5 kHz from the BFO (and the dial reading) by selecting the SSB mode. For single channel RFCS, the mark/space relationships are correct when upper sideband is selected.

3. Tune the incremental tuning to approximately 450 Hz and adjust as previously described for a appearance on the TTY converter scope.
This method of receiver tuning is preferable to the use of the CW mode because of the higher stability of VERNIER tuning and the better selectivity of the SSB mode. Using the receiver in this manner also provides better CW reception than that of the CW mode for the same reasons. The R-1051/URR bandwidth is 7 kHz in the CW and the AM modes , and 3.2 kHz in the SSB mode . The narrower selectivity in the SSB mode provides approximately a 2-to-one improvement in signal-to-noise ratio.
Because the AN/URC-32 uses only one stabilized oscillator for both transmitting and receiving, it cannot be used in the transceive mode with a 2550 Hz TTY converter.

AFTS (Audio Frequency Tone Shift) RATT NETS
AFTS terminal units of the AN/SGC-1 series and the newer CV-2460/SGC are reliable and "nettable" items of the ship's TTY system. They are versatile equipments ideal for ORESTES nets within a task group or task unit. For this reason, shipboard operators and technicians should understand their use and features in order to get the most from them. There is no better way to learn the capability of an equipment than by actual operation. This can be done easily by operators who want to become proficient, using an authorized UHF drill frequency.

In the receive mode the equipments are audio-to-DC converters. Audio from a receiver is fed into the terminal unit. The signal could have been transmitted either as AFTS or RFCS, as long as the receiver converts it to the proper tones.

Each terminal unit has a mode selector switch which can place it in constant XMIT or constant RCVE, or an AUTO position which permits it to switch to receive whenever a signal arrives from the receiver or go to transmit, keying and modulating the transmitter, whenever the local TTY keyboard is operated. This is ideal for net operation. The CV-2460/SGC has full duplex capability, permitting simultaneous use of transmit and receive functions.

The AFTS terminal units interface with other equipments via three basic inputs/outputs other than the AC power connection:
1. A DC circuit which is looped through the TTY patch panel.
2. An audio input into which a receiver feeds tones.
3. A keying and modulation output by which the terminal unit controls a transmitter.

The equipment is very simple to use, and will function effectively provided that compatibility is maintained with the other parts of the system. The first point of concern is adjustment of the receiver that is used to receive the radio signals. If the output of the receiver is noisy when no actual signal is being received, the noise will trigger the terminal unit into a RCVE condition and it will not go automatically into the XMIT condition when the local teletype keyboard is operated. The noise output of the receiver must be kept low or squelched off during the time no signal is being received. Ideally, the no-signal noise level should be about -30 dB when the receiver output is set to supply audio tones at 0 dB. Noise from the receiver must not be allowed to trigger the terminal unit into a RCVE condition when no tones are being received. The second point is based on the transmitter modulation level that has been set on the ship. If all radiophone remotes are set to furnish -10 dB modulation level into the transmitter speech amplifiers, and the audio output of the AFTS terminal unit is set to furnish 0 dB, overmodulation will occur which will cause distortion and interference. If the output of the terminal unit is set for less than the standard RPU (Remote Phone Unit) modulation output, undermodulation will occur which will decrease the reliable communication range between ships. If the transmitter has a clipper-filter in its speech amplifier, this circuit should be turned off for tone operation; AGC (or AVC) circuits should be left on. The audio input and output levels from the TTY terminal unit should be set to furnish the same levels into the audio distribution system that the remote phone units furnish. Refer to Transmit-Receive Panels and Remote Control Units under Subsection 1-9 of the EIMB.

Don't overlook the "spread" between mark and space frequencies; 700 Hz and 500 Hz for narrow shift AFTS gives a spread of 200 Hz. The normal spread for single channel RFCS in the low frequency bands is 170 Hz. Either terminal unit can be used to copy narrow-shift RFCS of the type used on low frequencies when the associated receiver is set up properly. Just tune up the receiver to the desired signal as previously described in Tuning in A Single Channel RFCS RATT Signal, except that the receiver BFO is offset by -600 Hz rather than 2000 Hz (or 2550 Hz). The audio output from the receiver will be near enough to 700 Hz for mark and 500 Hz for space that the terminal unit can copy it. The CV-2460/SGC provides the additional capability of being able to copy wide shift RFCS single-channel circuits.

Either AFTS terminal unit can also serve as a part of single-channel UHF-to-HF relay circuits. It converts the AFTS signals received on UHF into a keyed DC loop current, and the loop current in turn operates the wide-shift RFCS circuits of the HF transmitter. Care must be exercised if the terminal unit and the HF transmitter have separate loop power supplies. The two power supplies must not be patched together. If such a risk exists, one solution is to wire the terminal unit to a miscellaneous jack on the TTY patch panel rather than to a looping jack. It can then be patched into either loop as required.

When the receiver input levels and the modulation output levels are properly set, and the mark and space frequencies are correct, the AN/SGC-1 and CV-2460/SGC series terminal units will provide reliable and versatile communications. 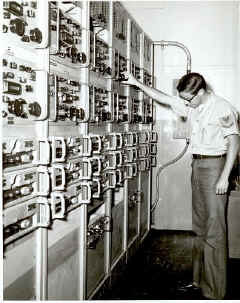 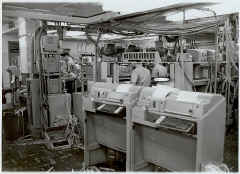 This is a great email list for TTY and RTTY information
http://mailman.qth.net/mailman/listinfo/greenkeys
Check out the greenkeys archives